Oregon has a few homegrown box bikes, or at least did once. CETMA makes two cargo bikes that can be rigged to carry kids, the Largo (long) and the Margo (not long). However CETMA is moving to California and going off line for a while. Joe Bike used to make Boxbikes and Shuttlebugs, but doesn’t anymore. I realize I need to write yet another post (in my nonexistent free time, these cargo bike write-ups take forever): Bikes we didn’t try and why. There is also Metrofiets, a custom box-bike that appears to be a bigger operation than the other two.

There was, evidently, some controversy when the Metrofiets first came out, with claims that it was a knockoff of the Bakfiets. I can only assume that anyone who believed this has never ridden both bicycles, because although they look similar, they are so wildly different to ride that it was almost unnerving to try them back-to-back as we did. On a Bakfiets your posture is very upright, and the handlebars have almost an ape-hanger feel to them. On a Metrofiets everything is reversed, so you sit upright but everything is way down low. I had a little Goldilocks moment: “That bike is toooo high. This bike is toooo low.” Actually there are advantages and disadvantages to both postures, but seriously: you might get confused about which bike is which in the shop, but you’ll never have any doubt which one you’re riding.

Hanging out in Metrofiets. My kids view box bikes as couches; they kick back, get a little reading in, just relax, basically.

The Metrofiets is a box-bike, meaning that the kids are in front like they would be if you were pushing a wheelbarrow. As I’ve mentioned before and will probably continue to blather about ad nauseum, having the kids in front is awesome. The Metrofiets is one of the longest box-bikes we tried, at 8’10”, which the lovely people at Clever Cycles helped me measure, and then, because none of us could believe the Metrofiets was almost a foot longer than a Bakfiets, we rolled them right next to each other to check. It is. The box is also a couple of inches wider.

The Metrofiets is an American bike: designed in Portland, made in the Pacific Northwest, and built using U.S. steel. The Metrofiets guys, whom I kept messaging but missing in person, are incredibly nice, and I love that they are building this bike. It is intended to be sportier than the traditional kid-hauler. Portland is not without hills, and in a wild departure from the Dutch oeuvre, they actually imagined that people riding a bike like this might want to go up and down some of them.

The Metrofiets is largely a custom bike, and that has pros and cons and also makes assessing it significantly more complicated. It is also a very pretty bike, and I don’t think I would feel comfortable leaving it outside overnight, and I would lock it up very securely at any time of day in a city. Most cargo bikes weigh a ton, and this one is no exception, so once again if you got this bike, you would want some kind of walk-in storage.

The pros of the Metrofiets:

The cons of the Metrofiets: 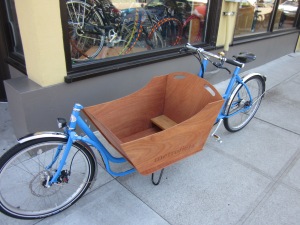 So, the Metrofiets. It started out as one of the very few bikes we knew was a real possibility when we started investigating cargo bikes. Sight unseen, the Metrofiets was my brother-in-law’s pick for us. It could handle hills, could easily carry two kids (and much more), and could be assisted. Having a box bike would be a useful complement to our existing mid-tail bike, the Kona MinUte. And because we had just sold our car and gotten more than enough from that to cover buying this bike and then some, the eye-popping price wasn’t impossible. Yes, I realize that we’re incredibly fortunate.

On the other hand, we had some concerns about the bike that we didn’t expect: the Metrofiets is awfully long in front which makes it feel less safe at intersections, it would likely be the most difficult option to park away from home, we both disliked the kickstand, and the steering would take more getting used to than we’d hoped.  Although the width of the bike wasn’t an issue while riding, it might not fit through our basement door. (At some point I realized it would be possible to ride around with our garage door opener hooked to a bike. It would be weird, but feasible, not to mention kind of funny; then again, maybe less fun after the novelty wore off.) Finally, getting this bike would require us to make some decisions about customization that we didn’t feel fully qualified to make.

After riding the Metrofiets I wasn’t left with a strong sense that this was the bike for us, but we didn’t rule it out either.

10 responses to “We tried it: Metrofiets”